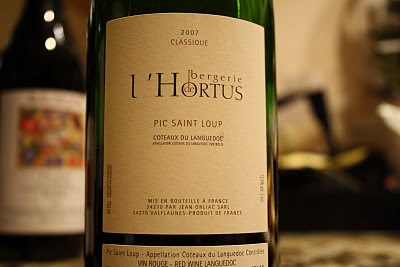 Made from 60% Syrah, 20% Grenache and 10%, Mourvedre, this stainless steel fermented and aged wine definitely performs above its price point. You can smell and taste the "garrigue" in the wine, (the wild herbs that are everywhere on the Languedoc hillsides). Wild thyme, rosemary and the ever elusive black truffles make their way from your nose into your mouth but at the same time, the wild blueberry fruit from the Syrah shines through. There is a touch of smoky bacon fat and a dash of white pepper as well.
The 2007 vintage was ripe for the most part but not overly so and this wine shows a fine acidity that keeps your mouth watering for more.
With the Lentil and Proscuitto soup from tonight it seemed the perfect match as the acidity cut the fat of the prosciutto and the herbs in the soup, mostly basil and oregano went well with the aroma of wild herbs and black truffles in the wine.
Truly a match made in heaven.
See here, http://www.beauneimports.com/retail/producer_detail.php?producer_id=32&from=producers , for some more info on the producer and some great photos of the valley. It is truly one of the most beautiful places I have been in France and I would love to go back and spend some more time.
J
at January 19, 2011 No comments:

Babbo Natale sent me a gift from G.D. Vajra that just arrived in the mail today . . . 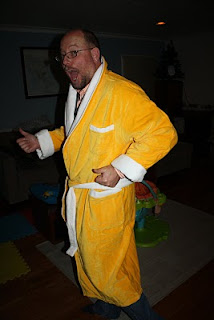 Santa Cruz Island - part of the Channel Islands off of Ventura, used to make wine. Who knew?

"The Most Romantic Vineyard Is Out At Sea" Here is an account about a unique vineyard that was in operation at the beginning of the 20th century, located on Santa Cruz Island, the largest in the chain known as the Santa Barbara Channel Islands.....

Of all the vineyards, the most romantic is out at sea on the island of Santa Cruz, twenty miles from Santa Barbara. Here is an island, twenty miles long, the private property of wine men who seriously object to visitors - but he who gains entrance finds one of the most attractive and interesting vineyards in California.

I found it one September day, and landing at the little wharf, one of the owners of the island escorted us up the one entrance - the arroyo - to the ranch. The road crossed it time and time again, passed beneath great oaks and other trees, and finally came out into a small valley hemmed in by the island mountains.

Here the vineyard stretched away in every direction, the vines trellised up in the European fashion. These vineyardists are Italian Swiss and they have brought over their own wine makers who live here, out to sea and out of the world. Here was a typical French mansion with its iron balconies, so common in New Orleans, and beneath the broad veranda hung a large French horn that was blown to bring the pickers from the vineyards.

A long building was the mess hall, and near at hand was an artistic chapel and a large sun dial of interesting design. The great brick winery and its enormous tuns and casks finished the picture. One might sail by Santa Cruz a thousand times, even skirt its shores, and never suspect that over the hills and down deep in the valley, hidden away, was one of the famous vineyards of California. The vineyard is known for its variety of grapes and their peculiar flavor. It is watered by streams that flow through beds of fern and brake, down the rocky slopes of the island mountains and the roads that lead to the vineyards, down past shaded by groves of eucalyptus trees, while the hills bear pines from Italy which seem to have brought their climate with them.

The wine of Santa Cruz is hauled down the beautiful arroyo and shipped to Santa Barbara and San Francisco, but the island should be free that the wanderer in his own land could visit it and quaff its wine in what is one of the most charming and romantic vineyards in America. The outdoor activity that marks the great California vineyards quickly subsides and is transferred to the wineries at La Manda, Sunny Slope, Mission San Jose, El Pinal, and many more in the north and south. The boxes are dumped, the grapes shoveled onto an endless chain lift by which they are carried to the presses, the rejectamenta finally heaped in the winery yard - a mountain of stems seeds and skins that fills the air with an incense peculiarly its own.

Justinian Caire, Frenchman, successful businessman from San Francisco, acquired Santa Cruz Island in about 1880. Caire had Swiss-Italian and Mexican men working in the vineyards, and French winemakers were enticed to the island to work their magic.