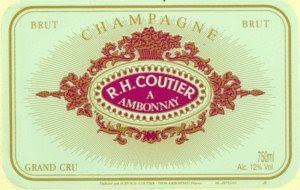 R.H. Coutier Champagne seems to be getting lots of buzz; from the internet chatboards (someone called it, "baby Krug", although I'm sure that there are lots of wines from Ambonnay that are called "baby Krug" and none are actually like Krug at all), a customer called me out of the blue and asked for it (having had two customers of hers bring the wine to her at her restaurant) and, not to be taken lightly, Allen Meadows of Burghound seems to love this little raccoltant - manipulant (RM) house, too.


"Champagne R. H. Coutier is located in the grand cru village of Ambonnay, one of the top wine-producing towns on the Montagne de Reims. The Coutier family has been in the village of Ambonnay since 1619, with the current head of the family estate René Coutier. The Coutiers own nine hectares of vineyards in Ambonnay, and interestingly, although Ambonnay is generally regarded as pinot noir country, the Coutiers’ vineyards are planted with one-third chardonnay and two-thirds pinot noir. In fact, in 1946 René Coutier’s father was the first vigneron in Ambonnay to plant chardonnay in the village, which has done well over the ensuing decades and now is as highly regarded as the pinot noir from this grand cru village. The vineyards on the Montagne de Reims shift exposure as one arrives in the village of Ambonnay, facing due south and producing a rather warmer microclimate for the grapes. There is also a bit more clay and a bit less limestone in the soils of Ambonnay than is typical throughout the region, which tends to produce more sumptuous styles in the wines, such as Coutier’s, that rely solely on Ambonnay fruit.

This is not a large domaine by any stretch of the imagination, only producing 25,000 bottles in any given year. The Coutier house style is accentuated by René’s vinification and cellar techniques that seek to marry the traditional richness of Ambonnay fruit with the racy and pure style that Monsieur Coutier cherishes. In this regard, only half of the Coutier wines go through malolactic fermentation, as René feels that this perfectly balances opulence with raciness in the finished wines. Barrel fermentation and/or aging is not used for any of the wines with the exception of the Cuvée Henri III. As Monsieur Coutier still sells off fully eighty percent of his production to other houses, his own bottlings are a bit more dominated by chardonnay in the blends than one might normally expect from a house based in Ambonnay.

The non-vintage brut, called Brut Tradition, is comprised of 70% Pinot Noir and 30% Chardonnay, and is an excellent and racy bottle. The Champagne house of R. H. Coutier is one of the finest in Ambonnay, and is a wonderful introduction to the magic of grand cru bubbly in the heart of the Montagne de Reims." - Beaune Imports
at December 18, 2008 No comments: 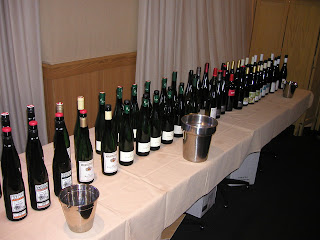 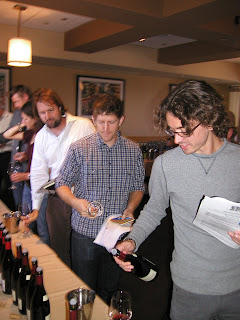 A long but amazing day. First, all good days start out with a BLT and that is what I had for breakfast over at Norms diner on Pico. Best to eat breakfast at a place that serves breakfast all day in my opinion.

So the big day was the SoCal Annual Fall Tasting for Beaune Imports, The Age of Riesling and Rinascimento Imports. We had over 200 wines for tasting at Upstairs 2 @ the Wine House. There was also a retrospective tasting of Didier Dagueneau wines from 1994 to 2006.

In a word, awesome. 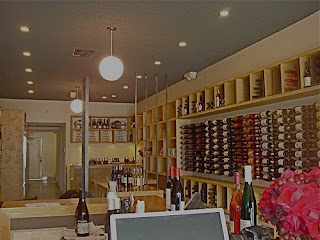 Doing a wine tasting down at Elvino on Abbot Kinney this evening from 6 pm to 9 pm with the following wines: 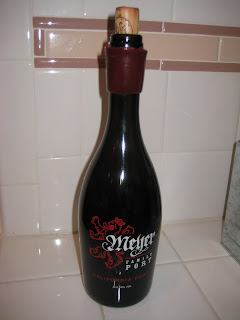 So my friend Tony Poer has been the regional rep for Meyer Family Vineyards for awhile now and as he doesn't have any representation in So Cal right now I mentioned to him that I wouldn't mind showing the wines around and seeing if anyone would bite. Not for cash, but maybe for some goodwill down the way.

Tony and I go way back. Actually, he is one of the first guys I called on when I became a sales rep lo' those many years ago now, like 15 years ago, in the Bay Area. We were about the same age and he was buying for a really hip place in the Mission called The Flying Saucer (?) with some crazy french chef and when that closed he moved over to Bruno's in the Mission that had transformed itself from the place that my Dad used to go in the late 60's and early 70's for spaghetti and meatballs, 3 martini lunches with his downtown insurance buddies into a 1/2 jazz/funk speakeasy and 1/2 temple of decadent French inflected market fresh cuisine with a great and eclectic wine list.

Of course they didn't pay their bills on time and most of the wait staff was stoned or on some other drug, but Tony bought wines that no one else would buy and would run them by the glass and go through like 5 cs a week of some organic Bourgueil when no one even knew what Cabernet Franc actually was in California.

But I do remember fondly making a sales call once in my car on the backside of the restaurant that was probably the sketchiest stretch of avenue in the whole of the Mission and of having a woman of the evening proposition me through the passenger side window by lifting up her skirt and sticking her bare asset, a very large bare asset at that, into the car to try to entice me. Needless to say I decided never to make my sales calls from my car in the back alley behind Bruno's.

Wait. Where was I? Oh yeah. Meyer Family Vineyards. So anyway, I got some samples of the Port and had never actually opened a bottle and boy, was I surprised. It tasted exactly like what they used to call a Special Reserve Porto from Portugal, but not just any Special Reserve, but it tasted like the Dona Antonio Special Reserve from Ferreira. (They don't use the term Special Reserve anymore for Porto as it never had any legal definition of what "Special" or "Reserve" actually meant for the style and substance in the bottle.)

The Ferreira Dona Antonia was what I liked to call an eight year old Tawny combining a little overt fruitiness of a Vintage Character with the nuttiness and lighter color of a Tawny and the Meyer Family tastes just like it.

Lots of dried berry aromas and some cedar and tobacco leaf and a touch of menthol in the nose and in the mouth, just this burst of flavor followed by a honeyed, sappy, molasses character. The alcohol was balanced and the finish really smooth and lasting in the mouth. Excellent.

So if I ever say to you, "Hey! Wanna taste some California Port with me?", don't turn up your nose at the best one that I have ever had.
at September 25, 2008 No comments: Don't worry, the earthquake didn't get us here in Santa Monica, but we sure did feel it. Now, I am a native of California and earthquakes have been a part of my life forever; I even was in the epicenter of the biggest earthquake of the past 100 years in 1989 in my last year at Santa Cruz when the Loma Prieta earthquake shook Northern California. That was scary. This one was just a little bump and rumble but I was working in my office and felt the house start to shake and shimmy and I was out of my chair like a shot and out the front door. All my neighbors who were home at the time felt it to and we were making sure everyone was all right and looking nervously around for signs of damage, but there was none. And we didn't feel any aftershocks this time either.

Actually, worse than the earthquake was my hangover from our 4th Annual CineOzone Outdoor Movie Night that took place last Saturday. Let me tell you, when the cops come banging on the door in my neighborhood here in Venice, you know that you must have been really loud since they almost never show up for anything less than a robbery or worse on a Saturday night. They usually have bigger fish to fry. But my intrepid wife and companion handled all of their complaints and sent them off with a smile. A great time was had by all the movie, The Black Stallion, from 1979 was a huge hit. Any ideas of what we should do for next time? The wines, the beers, the food, the movie candy, the popcorn. It was all too much for my digestive system and I spent most of Sunday trying to recuperate.
at July 31, 2008 No comments:

Do you see George Bush as Barabus? So this is a little part of a restored painting at the Diocesean Museum of Cortona, Italy. It depicts Barabus (the thief) carrying the cross for Jesus up the hill before he gets crucified (painted I think by Beato (Fra) Angelico. Looks like someone took some editorial license with that restoration, eh?

Rome Coliseo and the Vaticano So when I was in Italy for my year abroad, I also played a little semi-pro baseball for a little team that was coached by the father of one of my Italian friends. They even paid me . . . just enough to defray the the costs of the train to practice and to the games. When I was in Italy this time we passed by Sasso Marconi on the way from Milan to Tuscany and on the way back to Milan I decided to stop and see where I used to play etc. And here we are . . . it looks different, but the same.
at May 20, 2008 No comments: