Bill Mayer's Age of Riesling/VVWS wines to be poured at Elvino in Venice, CA all weekend . . .

As many of you know, I represent Bill Mayer's The Age of Riesling Austrian and German wines here in . These wines are magical. Come on down and taste some of the rarest and most interesting wines being made today.

's wine history goes back to the fourth century A.D., when the land that is now was controlled by the Celts. These ancient inhabitants controlled much of what is now , planting vineyards to make wine along the way. By 800 A.D., the time of Charlemagne, winegrowing was well established in the region, and by the King's decree, guidelines were set into place for viticulture and the classification of vines. Charlemagne was also responsible for the first tasting rooms and wine shops when he established Buschschenken, taverns and inns where winegrowers could sell their wines directly to the public.

Monasteries were responsible for most of the wine production in the Middle Ages. Monks from the Cistercian Brotherhood brought Pinot Noir from and by the thirteenth century the Benedictines had already established many famous vineyards.

Though the Riesling grape came to the region in the Middle Ages, 's most famous grape, Grüner Veltliner didn't show up until early in the twentieth century. The most widely planted grape in was actually developed in the laboratories of the , as researchers were searching for more frost-resistant grape types.

Our three wines this weekend come from the wine region of (Niederösterreich), which is actually in the northeastern part of the country. The name refers to the regions location along the lower part of the river. Our two white wines are grown in the Wagram-Donauland area, east of . The is actually an ancient shoreline left behind as an ancient river receded towards the . What's left is a cliff-like formation that runs parallel to the river. On top of and on the other side of the cliff is the hill country where vines are grown. Most of the soil is loess (löß), perfect feeding ground for Grüner Veltliner.

Our red wine is from vineyards just south of in the Thermenregion, named for the many natural that dot the area. The vineyard where Spaetrot Gabeshuber's Pinot Noir and are grown actually sits over a volcanic fault line. The winemaker believes this actually benefits the vines because of the constant warmth emanating from the ground. Once you taste their Klassik you'll have to agree that these were some happy grapes.

Every Second Sunday of the Month is Sparkling Sunday

Bernard Ott has built a considerable reputation in for his Grüner Veltliners, but he also makes a small amount of Riesling as well as Sauvignon Blanc. In 2005 Ott committed to biodynamic vineyards, and according to importer Bill Mayer it has given Bernard more peace as he spends his time in the vineyards. The vines are planted in red gravel soils (Rotem Schotter), at elevations up to 1200 feet.

Made in stainless steel, this wine shows floral notes with crisp aromas and flavors of tangerine, lime and tropical fruits. Racy acidity and crushed-stone mineral flavors focus the fruit and keep everything on the palate clean and bright to the finish.

In 1999 Johannes and Johanna Gebeshuber purchased the winery Spaetrot, in the famous winemaking , located less than a half an hour south of . The winery was a respected co-op in the 19th century but was in a state of decline when it was purchased in 1905 by the famous/infamous Mayor of Vienna, Karl Lueger. Lueger built large cellars and brought the winery up to the standards of the time, but by the 1990's the co-op was again in a state of disrepair, brought on largely by the wine scandal of 1985.

The Gebeshubers focused on bringing back the quality of the original Spaetrot.. With a respect for tradition the couple brought the high standards back to the vineyards and cellar. They have chosen to specialize in the traditional white vatietals of the region: Zierfandler and Rotgipfler, the wine this blend produces is also called Spaetrot throughout the region. The duo also grows red varietals: Blauburgunder (Pinot Noir) and , of which the Klassik is a 50/50 blend of.

Grown in the warm, fossilized soils around Gumpoldkirchen, this wine is ripe with cherry and red berry aromas. Flavors of black cherries and ripe red fruit mix with spice, floral and earthier notes of tea leaf. Delicious with duck, delicious with vegetarian lasagna.

Importer Bill Mayer's Notes: "There are still a few good values in the Wachau, wines of great integrity from small producers. And that's where Mr. Bäuerl comes in. Bäuerl (a very difficult name for us Yanks to pronounce correctly) is in the little , up the street and behind Joseph Jamek. His estate is tiny, only 5 hectares (12 acres), though he leases 2 more. Though the vineyards overlap, the wines are quite different. Whereas Jamek is elegant, subtle, and fine, Bäuerl's are lusty and earthy, with plenty of stuffing. They are not the most elegant wines in the world, but they give you the goods, and are just packed with flavor. Young Johann Bäuerl is tall and thin, very boyish, and rather shy. Perhaps that is due to his very rudimentary English? His German is idiomatic and strongly accented, and not easy for me to follow. His hands, which are large and expressive, are farmer's hands, see the photograph. He has never exported before and is not well-known, yet. But it is clear that a fire burns in him. He is ambitious, wants to ascend to the front rank of Wachau growers, and with his energy and seriousness, I'm sure he will."

So the lovely people at Cheese Store of Beverly Hills (www.cheesestorebh.com) were nice enough to invite me to participate in their monthly cheese and wine tasting, which this month was centered on the Pinot Noir grape and its progeny, Pinot Gris (or Grigio if you are Italian) and Pinot Blanc (or Weisser Burgunder, if you happen to be Austrian!)

A great time was had by all and I showed 3 wines of the 6 presented that night. The Stadlmann Weisser Burgunder 2007 from Thermenregion, Austria, the Domaine Roland Schmitt Pinot Gris from Alsace, France and the Ronco Severo Pinot Grigio from Friuli, Italy, made in a "Ramato" style (i.e. fermented on the skins to get a nice copper color.)

Below is a little photo essay made from fantastice pictures taken by Anja of the Cheese Store of Beverly Hills . . . of course she could have made me a little thinner, but who is nitpicking?

Some selections of cheeses: munster, epoisses 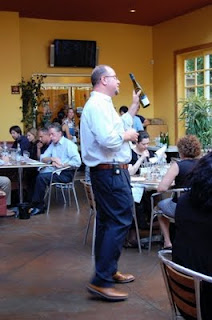 and me yakking some more and lifting my feet . . . 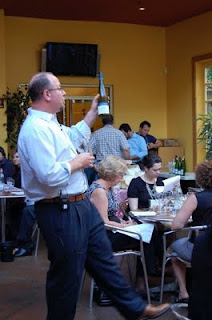 and people listening to me yak some more . . . 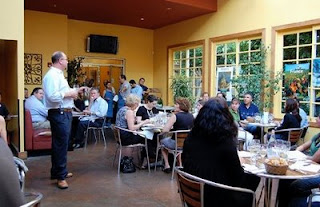 who knew I was pigeon toed? 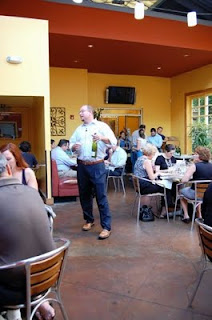 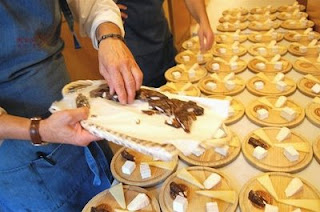 Munster d'Alsace to go with the Pinot Gris 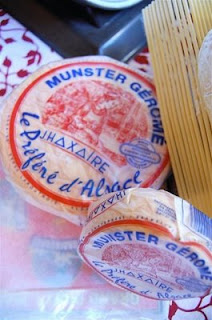 the famous Epoisses to go with the red burgundy 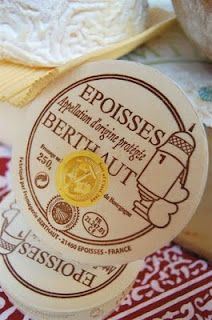 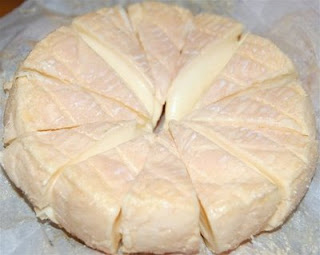 the Cheese people treat me so well. Tony even pronounced
the name of my company correctly . . . 3 times! 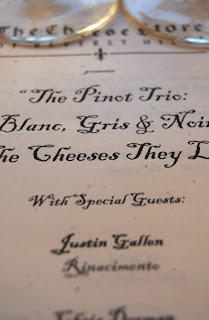 beautiful summer evening with the roof open at Sharky's 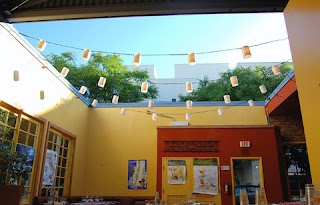 The Ronco Severo of course was the most controversial wine of the night. No one had ever seen Pinot Grigio with that color or taste or smell before. Since the wine is fermented on the skins just like a red wine, it has the color of the grapes and of Pinot Grigio grapes at harvest are almost the color of copper. Plus, the wine has some tannins from the skins making it perfect for cheese and other fatty foods, but at the same time, quite disturbing for the uninitiated. Let's just say that I was dancing as fast as I could to get these people to look at the wine and Pinot Grigio through a different lens than they normally would. Tough but I made a few converts. 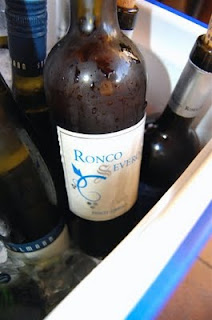 The Stadlmann Weisser Burgunder was the revelation of the night. Crisp, almost salty in its minerality, it showed the best of what Austrian white wines can be when grown in the right areas by the right people. Just lovely. 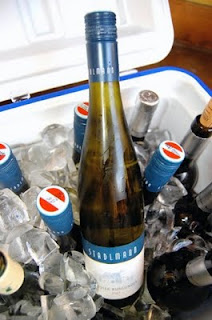 A good time was definitely had by all and thanks again to all the guys and gals at Cheese Store of Beverly Hills for being such great friends to me and Rinascimento Wine Company. 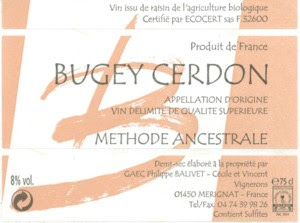 Message
I've been showing this wine around for a few days now and the response has been incredible. What a great summer wine for barbeques and for charcuterie or salumi! The soft, slightly off-dry fruitness is the exact antidote for the salty and smokey meats. Slightly rose` colored but with great acidity.

With Lambrusco making a comeback and Moscato d'Asti in the wings, I would count this is the next best wine for people looking for a great quaffing, festive wine of summer.

Producer: Domaine Balivet (Organic)
Region: Savoie
Wine: NV Bugey Cerdon Méthode Ancéstrale
Very fresh and zesty, this wine is a fabulous addition to just about any occasion.
Low alcohol (8%), off-dry and unique. It shows good minerality and acidity in the mouth with fresh grape aromas in the nose.
From Michael Sullivan, Beaune Imports:

In the foothills of the Alps northeast Lyon exists a little-known winegrowing area named Bugey Cerdon. Bugey is the area and Cerdon is a small town within. In this samll region a handfull of dedicated growers continue to produce a wonderfully refreshing, off-dry rosé sparkling wine, the Méthode Ancéstrale. When entering the region by car, unlike other winemaking regions of France, it is not readily obvious where the grapes are grown or in fact, if there are grapes at all. The vineyards, once spotted, appear to be small patches or clearings on the high slopes of the steep hillsides, generally facing south. Without a local winemaker, access to these vineyards would be impossible. This unique wine can be made from a variety of different grapes, but most are made from same Gamay that is grown in nearby Beaujolais. The wine is bottled during the primary fermentation when the alcohol level is roughly 6%. The fermentation continues until the pressure inside the bottle stops the fermentation at around 8%. This is basically the same process as artisanal cider production.

We stumbled upon this wine in a wonderful farmhouse-restaurant in the hills above Beaune. La Ferme de la Ruchotte serves only meats, eggs and dairy that they raise and their wine list is exceptional. Mostly organic, very reasonably priced and highly eclectic.

Vincent Balivet and his family are one of only a couple of organic growers in the area, and they produce but one wine.