Let me introduce you to the fantastic wines from Musto Carmelitano.

Elisabetta Musto Carmelitano’s family has been making wine for four generations in the DOCG of Aglianico del Vulture. For much of that time the production had been mainly selling grapes but also wine in demi-johns. Elisabetta began in this way as well, though in 2006 she began building the current winery and created Azienda Agricola Musto Carmelitano. She directs the winery with help from her father and brother. She gives great thanks to her father and uncle who each believed in her and continue to give her great support.

They have 14 hectares of land – both vineyards and olive groves. The total production of wine, however, is a miniscule 1700 cases! Part of the land is from her father, part is from her uncle – also a small part from her great-grandmother. They have vines that are as old as 100 years. The vines of their top cru – Pian del Moro have an average age of 90 years. Their other cru Serra del Prete has vines with an average age of 45 years. They have been farming organically since the beginning and have been certified organic since 2010. 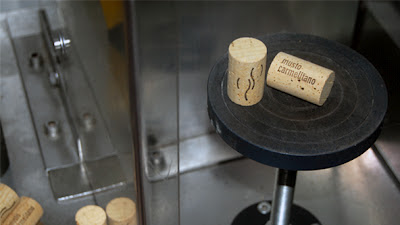 While relatively new as a winery, they are producing classic, traditionally-made wines that showcase the best of what Basilicata has to offer!
at July 24, 2012 No comments:


I would like to introduce to you some great new wines from the Valpolicella region in the Veneto that should be arriving this week (crossing my fingers that my container makes it out of the terminal!)

I met Nicola through Francesco Cirelli at VinItaly this year and his wines impressed me so much, that against my better judgement (meaning that I had no extra money), I brought them in.  These wines are fresh and exciting with great acidity.  So much acidity, in fact, that it completely changed my mind about Ripasso wines and Amarone.  Usually these wines leave me cold with their somewhat flabby acidity and high alcohol, but these reminded me of nothing like the monoliths I have had in the past.

Monte Santoccio pride itself on the fact that the Winery owns the vineryards that produce the grapes for its wines as this help Monte Santoccio have the control over all the stages of production. The cellar stand alongside (actually underneath their house) and the winery vinifies grapes only from the family’s own surrounding vineyards. Everything is organized so as to obtain maximum quality and done by gravity.

Monte Santoccio covers a total of over 3 hectares planted with vines. Located in Fumane, Monte Santoccio winery is in the heart of the Valpolicella Classico area and at an altitude that makes for a completely different micro-climate as almost anywhere else in Valpolicella.

Nicola Ferrari, winemaker, was only 26 years old when he started working at Giuseppe Quintarelli winery, one of the most prestigious Valpolicella/Amarone producers. He immediately recognized the importance of exercising control over the whole production process, by owning one’s own vineyards and vinifying one’s own grapes, so as to guarantee the quality of one’s wines and the credibility of one’s brand.

I am so excited to show these wines around.

I found out about this a few months ago at VinItaly as one of my producers there had just been to the domaine and chatting with Etienne had learned of the purchase.  But because it wasn't public yet and the deal wasn't signed, I wasn't able to talk about it.

This is big news.  Maybe not for the end consumer but to do a deal like this in this economic climate is pretty hard.  Chapeau to Etienne for making it happen.

And for all the champions of low alcohol, high acid, long lasting wines, it is only going to get better.

Read more about the deal at the link below: